Last week I put together a mess-free finger painting project for the boys. This was definitely a success! I first saw the idea on Pinterest (you can find my Pinterest boards here!), where Mama Smiles had done this project using blue hair gel. I used tempera paint, making this a great colour-mixing experiment at the same time. 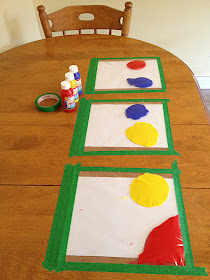 I squirted two primary colours into each of the three Ziplock freezer bags, put a white piece of paper under them, and taped the whole thing down with painter's tape. Then I let the eager boys have at it! 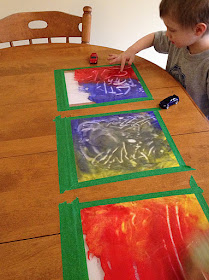 They first experimented with each bag to see what new colour was made when mixing the two primary colours together. Then they drew pictures, made handprints, and drove their cars over the paint to see the tire tracks. Turns out cars aren't exactly gentle on the bags. After a couple quick repairs with masking tape, the cars were parked for the rest of the activity. 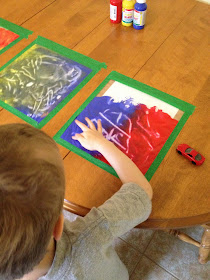 Next time I will make sure I get all of the extra air out of the bags before taping them down. A couple of the bags had air bubbles in them, which were much harder to remove once the paint was spread throughout the bag. Painting worked much better with the air bubbles removed. 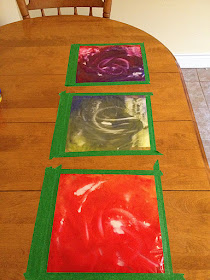 We kept the bags taped to the table all week, removing them only when we had company coming for dinner. Now I have them tucked away, ready to be brought out and reused again at a later time. In the meantime, good old fashioned finger painting is still a very popular way to pass an afternoon!